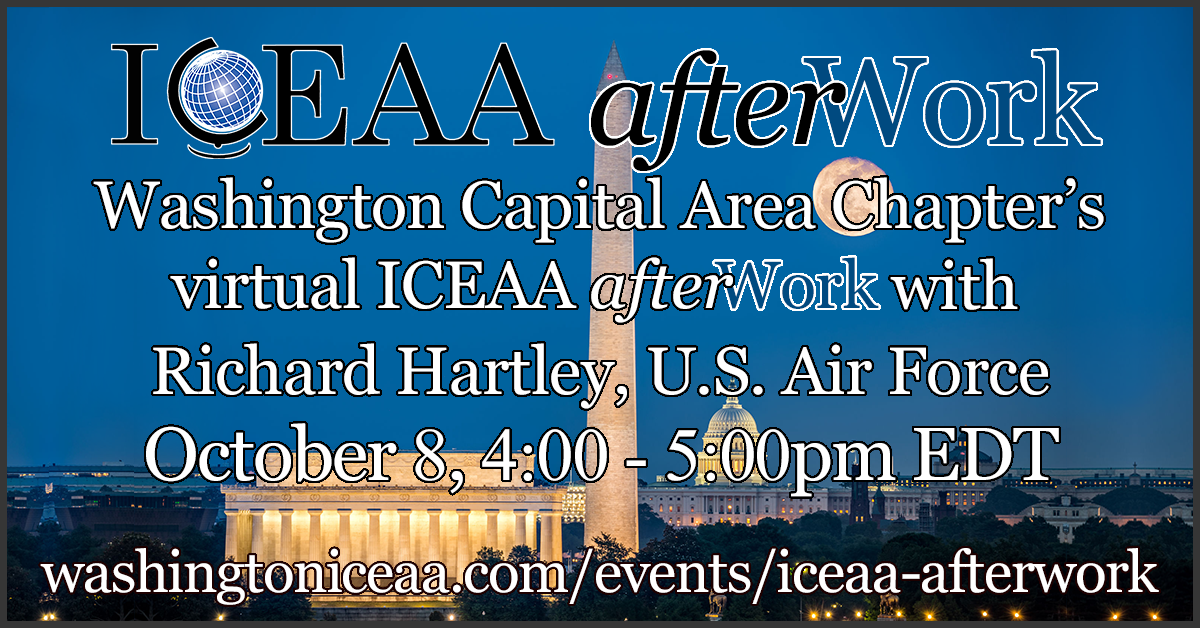 ICEAA AfterWork is a Meetup style event for the cost estimating and analysis community organized by the Washington Capital Area Chapter of ICEAA. Meetups are about connecting people with something in common and developing a community. While many connections today begin online, the most lasting relationships are made in person. ICEAA AfterWork was created as a follow on to the Next-Gen Cost Estimating and Analysis Meetup, and will continue its tradition of offering events that promote thoughtful discussion, distinguished speakers, and professional networking.

ICEAA AfterWork will address a broad spectrum of topics related to the fields of cost estimating and analysis and encourage the community to present ideas for future events. ICEAA AfterWork is a forum where current and next generation leaders of the cost estimating and analysis community can come together to discuss lessons learned from the past, the challenges of today, and the path forward for growing the size and relevance of the cost community and advancing the state of the art to better serve current and next generation customers.

Our distinguished speaker for this event will be Mr. Richard Hartley, Principal Deputy Assistant Secretary of the Air Force for Financial Management and Comptroller. He not only oversees the budgeting, cost estimating and financial operations of over $160 billion in annual resources that support Air Force priorities, but is also responsible for the professional development of over 12,000 members of the Air Force financial management community. He began his career in 1985 as a cost analyst and industrial engineer in the Naval Air Systems Command. His career then led him to serve in a variety of positions at the Air Force and later the Central Intelligence Agency, where he entered the Senior Executive Service (SES) in 2000. In 2003, he returned to the Pentagon to serve as the Deputy Assistant Secretary for Cost and Economics in the Office of the Assistant Secretary of the Air Force for Financial Management and Comptroller.

Richard will talk about his experience “growing up” working as a government cost analyst and then branching out into a number of different related and unrelated professions as a member of the government’s SES. He’ll share some key “takeaways,” or lessons learned from past jobs, his efforts to expand cost analysis capability and utility at the National Reconnaissance Office and US Air Force, and how he leveraged cost analysis tools skills while leading organizations outside of the cost analysis function. He’ll also discuss some of the key achievements in the field of cost analysis, the ones he’s most proud to be part of, as well as some of the “slip-ups” he’s not quite so proud of.  Most importantly, he’ll be happy to take any and all questions.

RDML Doug Small, Program Executive Office, Integrated Warfare Systems, who provided a unique perspective on challenges faced when leading a portfolio of programs and how cost estimating has helped enable his decision making process. Discussion included how credible cost estimates could and have helped in prioritizing programs and/or capabilities, what he hopes for and expects when being briefed on cost results, and what he sees as major challenges for the Service and Department in the future that cost analysts should prepare for.

Ms. Misty Tullar, the Director of Business Plans and Operations at the National Reconnaissance Office (NRO), provided insights into how the community can bridge the gap between cost estimation and budget formation, as well as how portfolio analysis can lead to credible, effective portfolio management. She emphasized that bridging this vital gap will move the cost community up the value chain in a meaningful way.

Fred Blackburn, who currently leads the Justice, Homeland Security, and Transportation business at Booz Allen Hamilton. Before joining Booz Allen in 2008, Fred headed up the management consulting division at Northrop Grumman/TASC. As a director, he was responsible for six lines of business, including acquisition management, decision analysis, cost and risk analysis, financial management, intelligence analysis, and change management.

Vice Admiral William ‘Andy’ Brown, who recently completed his 37-year naval career as the Director of Logistics of the Joint Staff. He currently works as the President and CEO of the National Defense Transportation Association. Throughout his career, he was assigned to the Naval Air Systems Command; the former Naval Aviation Supply Office; Commander, Naval Air Force, U.S Atlantic Fleet; Naval Supply Systems Command and Commander, Naval Air Forces. Brown has served in a variety of sea and shore duty assignment providing him with extensive logistics and management expertise.

Dr. Todd Calhoun, who currently serves as the Executive Director of Marine Corp Installations Command. He previously served as the Director of Program Analysis and Evaluation, Programs and Resources Department, Headquarters Marine Corps. Prior to his service with HQMC, Dr. Calhoun served as a Senior Operations Research Analyst with the Office of the Secretary of Defense, Cost Assessment and Program Evaluation directorate.